Does your organization have Microsoft 365?

Storyals training is currently available only for Microsoft 365.

How many people are you looking to train?

Storyals is designed for organizations with a minimum of 20 users. Contact us if you are looking for training for a smaller team.

Are you looking for e-learning, instructorled training or a combination of both?

Storyals offers a combination of e-learning and instructor-led training, for the most costeffective and impactful results. Learn more about what Storyals training is all about here or contact us directly.

What system would you like to use for the training?

What is Microsoft Teams?

What is Microsoft Teams?

Microsoft Teams is not a new product, but there’s still quite a bit of confusion about what it is, and how it can improve workplace productivity. Some people think that it is just a chat app. Some think that it’s just an upgraded version of Skype for Business. The truth is that Microsoft Teams is an extremely powerful application that can be used to enhance teamwork through enriched collaboration and communication. Unlike other Office productivity applications that have a legacy to preserve and millions of users to consider, Microsoft Teams is built from scratch with the modern workplace in mind. This also means that Microsoft Teams introduces a new work behavior, that many people – especially those that are used to email – might find difficult.

How can you explain the “teams” part of Microsoft Teams in a way that your organization can quickly understand? When I describe teams in Microsoft Teams, I use an illustrative analogy that most people can relate to. For those of you who have Storyals Lite or Storyals Pro, you will see me explain this in the “Enhance teamwork” introduction video. For the rest of you, I’ll share my description in this blog.

In Microsoft Teams you work in different “teams”. You can think of each team as a house where you work together with others. Everyone who is a member of the house will be included in everything that goes on in the house.

Even if you can “walk between different houses”, it’s a bit confusing and tiring. Similarly, in Microsoft Teams you don’t want to create or be a member of too many teams. For organizations that don’t have any governance in place, or for end-users that haven’t received any guidance, the number of teams created can easily grow out of proportion. This is not good for end-user productivity. When you start using Microsoft Teams you should think through how various groups within your organization collaborate with one another. Think through how to create teams so that the collaboration will be as efficient as possible.

When you first build your house it only has one room. In Microsoft Teams this corresponds to the “General” channel.

In this room, you can hear what everyone says -whether or not you are in the room at the point in time it is said. Everything is noted down. In Microsoft Teams this relates to “Posts”. Conversations, announcements, replies, everything is visible in the “Posts” window. Everyone in the team sees everything in the channel posts.

You are not limited to just talking to each other in the room. You can use facial expressions and body language! In Microsoft Teams you do this using reactions, emoticons, GIFs, memes, stickers and much more. By being able to express yourself more freely in the digital workplace, it’s easier for people to let their personalities shine through. You can create a more fun and inclusive culture, where the ones not physically located in the same place can still feel involved and as part of the team.

As you start working on more projects and more initiatives, different constellations of people in your house will break out and start working in different rooms. In Microsoft Teams a new room corresponds to a new “Channel”.  As of November 2019, you can select if a channel should be “Standard” or “Private”. You can think of a Private channel as an invisible room that only selected people in your house can see and have the key to enter. 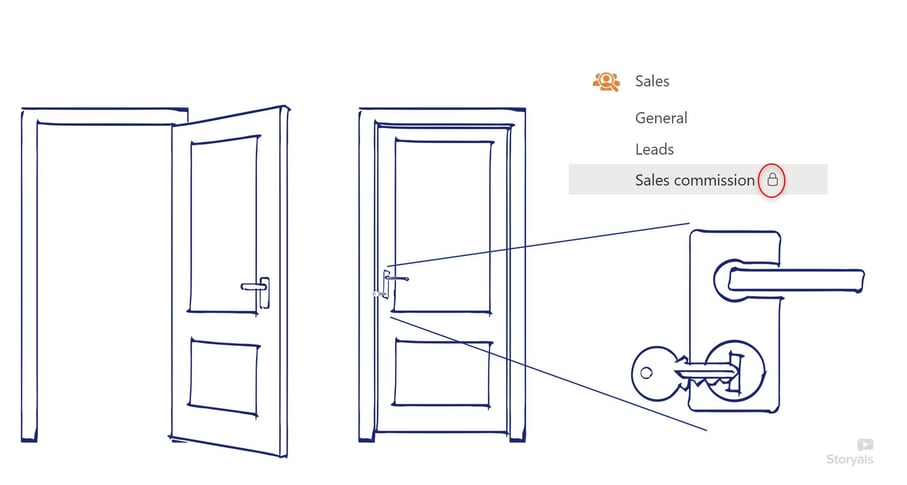 3) Think of the “Activity Feed” as the hallway

In the middle of the house you have a hallway. You can stand in the hallway, open the doors to the rooms you are most interested in, and hear all the conversations going on in the various rooms – without leaving the hallway! 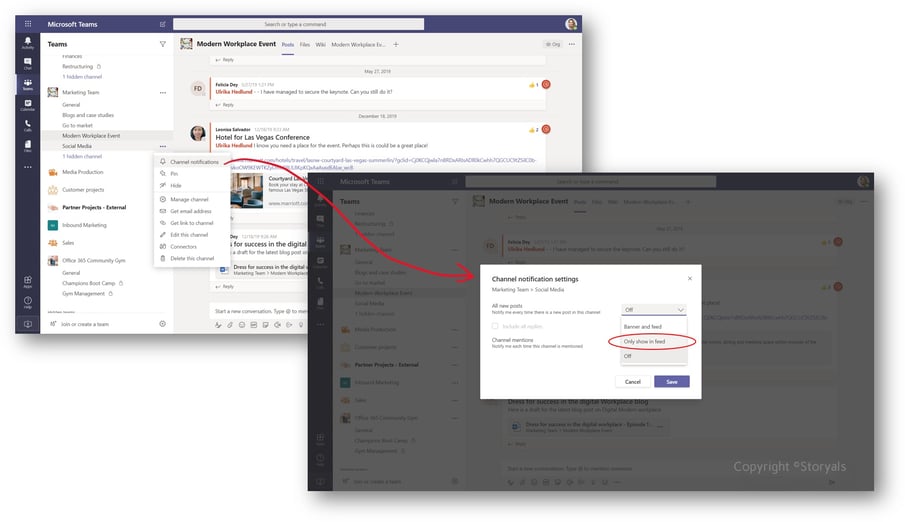 You don’t have to worry about missing out on anything that is being said in the rooms with closed doors. At any time, you can walk into the room and get up to speed on everything that has happened in the room. In Microsoft Teams, this corresponds to going to a channel and seeing what’s been posted in the “Posts” window. Also, if someone in a room wants your attention – even if the door is closed, they can just get your attention using a megaphone. In Microsoft Teams, this relates to an @mention. Whenever someone @mentions you, you will see it in your “Activity feed” whether you have turned on channel notifications or not.

4) Think of “Chat” as private conversations by the coffee machine

Sometimes you might want to have a private conversation with one, or a few people in your house. A conversation that is not heard by everyone else. In Teams you do this using “Chat” or “Calls”. Whatever you write or say here is only for the ones present. If you frequently have private conversations with a group of people, you can create a group chat.

Private conversations are great for social talk or for things that aren’t of interest to the others in the room. Such as, “I’m running late”, or “shall we meet up for lunch?” 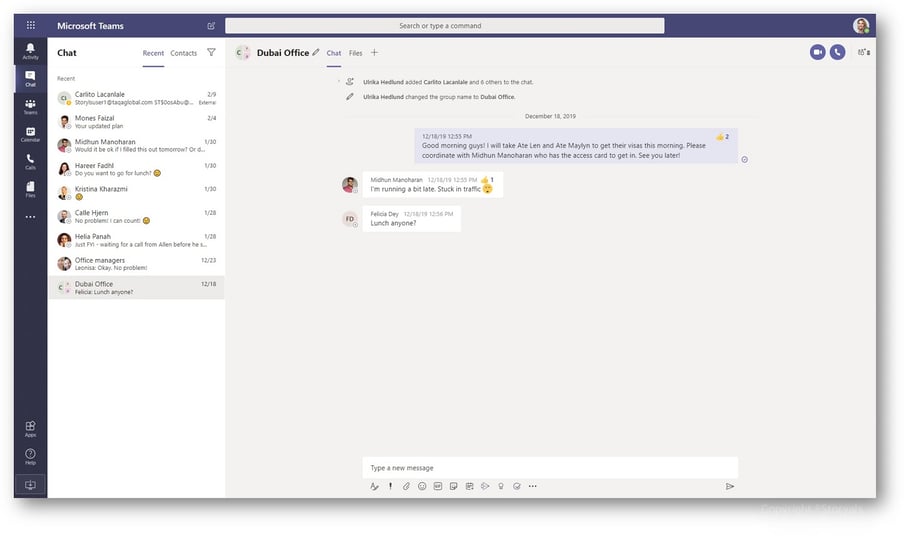 5) Think of “Tabs” as posters pinned on the wall

In your various rooms, you can pin things on the walls. This helps the ones in your room focus on what’s most important and it helps them find what they need. In Microsoft Teams this corresponds to “Tabs”. Here you can pin things of importance – such as Excel spreadsheets, shared notes and other apps.

Hybrid work, Mesh, Teams avatars, Open AI and Chat GPT…There are a lot of buzz words flying around in the media. A few days ago, Storyals CEO, Ulrika…

Why Storytelling is so Powerful for Learning

Let us rewind back for a moment to reminisce the teachers and professors we’ve had throughout our lives. Who do we remember better – those who taught…

When we talk about productivity tools such as Microsoft 365, we typically think about it connected to information workers. Those who sit in an office…

Get Storyals updates straight to your inbox!

We would love to hear from you!